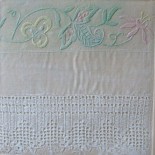 Reflections on Silence of Knitting

Two weeks have now passed since The Silence of Knitting and I have been putting off writing my thoughts about the event. Putting it off because it has thrown up so many questions that I have found it difficult to focus on what I really think or want to say.

So here are my initial thoughts, there will be more at some point.

Initial reflections on Silence of Knitting

The Silence of Knitting originated as an event for Margate but when I put the call out for people to take part it was a complete surprise the responses that came. An unexpected aspect of this project has been the sense of people coming together. People who know me and many who don’t, all joining together for a common purpose. The silent way that this happened, mostly through the mighty power of social media, sent such a loud and resounding message of the desire for people to have a way to actively remember.

During the week before Silence of Knitting I had a conversation with my Mum about the event. She is in her mid 80’s and for her Remembrance Day is always an emotional one as she lost her brother during WW2. She always says that she remembers him every day but that it is worse on Remembrance Day because she so longs for him to have come home. I have always been very sensitive to her feelings, but the conversation we had was about the buying and wearing of a Poppy and the act of donating to a charity in the process. She couldn’t understand why my event was not for charity and asked if the lace was going to be sold to raise money. I found myself unable to explain, not because I couldn’t but because I didn’t want to upset her so I just said it wasn’t that kind of event and left it at that.

That conversation stayed with me. I have absolutely nothing against the buying and wearing of a Poppy and happily do so every year. However, as I walked to the shelter on 11th Nov to prepare for the event before everyone began arriving I found myself questioning why I buy (and yes to me it feels like buying one rather than being given one in exchange for a donation) a Poppy and why wasn’t Silence of Knitting for charity. The fact that it was an art event was too simple an answer. I found myself going in to a local shop and buying a Poppy to wear for the event. I felt I needed to for my Mum. However, on putting it on I felt what a passive thing I was doing. That by wearing a poppy I was just saying ‘’Hey, look at me, I’m remembering’’ and that, if I chose, was as much as I needed to do. There was no need for me to know what I was remembering, or why, or to have any form of knowledge about what may or may not have happened, that simple act of wearing a Poppy was supposed to be enough and yet I knew, for me, it was not enough.

As I sat in the shelter knitting in silence alongside friends, acquaintances and near strangers, my thoughts jumping between my Mum, her brother, the zeppelin, Clarice, those around me and those knitting in silence around the country I felt overwhelmed by the sense that this was something I would not forget for a long time.  I kept thinking that this was what remembering should feel like, a loud, furious, confusing series of jumbled thoughts that made no sense but weren’t supposed to. That remembering doesn’t necessarily mean or lead to understanding, but provides an outlet for the confusion

The response from those who took part has been remarkable, and one of the most powerful is the way they felt it had provided them with an opportunity to remember in a way they had never done before.

For myself this event has given me new ideas, made me look at old ideas differently and made me think how my practise may change as a result.